What is Joomla anyway?

So you have heard the name Joomla! You heard it is some kind of Content Management System or CMS so you ask so can I make my site with Joomla for free? The answer would be yes and no both. Why? Joomla is free alright but that doesn’t mean any web developer will set it up for free unless you are the web developer yourself and neither will a website design itself. Also, CMS will only let you edit the content of your website not let you design or redesign the website. So your options for website design will be a free or paid Joomla design with not too much branding of your own or a complete custom design where a web deveoper will be needed to turn it into a Joomla theme/template.

Can a web designer build Joomla sites? Well, a web designer could customize your Joomla template but usually, they fail to turn a custom design into a theme or barely skin it and fail to add other necessary functionalities. So now you think.. oh so why not have developer/programmer design the website? Now, for your information, there is a big difference between designers and developers (programmers). Ofcourse, a good designer will be good at designing but you CANNOT expect him to perform good development work too, likewise, a good programmer will be good at programming and not designing. So it is always better to use both on a Joomla project to get the best of both worlds.

Joomla is an open source content management system (CMS), founded in September 2005 as a derivative of Mambo (another open source CMS which ceased development in June 2008). Joomla is one of the three most popular open source content management systems in the world. It powers nearly 25 million websites, or 10.3% of marketshare of the top one million websites, boasts 500,000 forum posts, and has thousands of contributors including DTW developers. Over 2,800 government websites from 204 countries use Joomla. So does that mean all these sites were built for free? NO! It only means that Joomla or by using Joomla platform will reduce the cost of your web development projects. You can create custom modules, components or plug-ins and add it to a Joomla platform in a very coist-effective manner. Now you say but wait a minute.. what are modules, components or plugins?

Are much smaller than components functionality wise. You use them to display little bits of information (like who’s online) in module positions (eg left, right) on your site. An example of a module is the newsflash module, main menu module, adsense code module etc.

Joomla components offers extensivity and are usually quite complex. An example of a component is the banner manager or CommunityBuilder

Make small changes/additions to Joomla’s functionality. An example of this would be a lightbox plugin when it’s installed/enabled it will scan your site for any [lightbox] tags around images and will convert these to an actual lightbox. 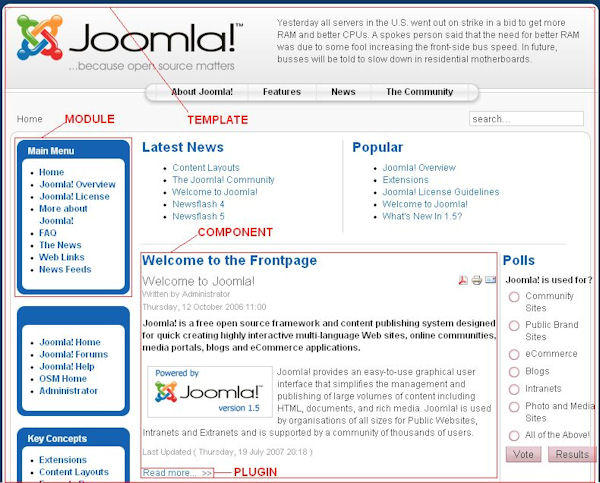 Joomla has made some interesting changes in the last year to its project, making it fairly unique among open source CMSs. First, the Joomla project now consists of two entities: a CMS, plus a fully independent framework. The framework is called the Joomla Platform, and it was released in July 2011. The platform may be used for many types of applications in development. The most notable development is eBay’s adoption of the Joomla Platform, as it develops an intranet system for measuring analytics.

What kinds of sites can be built with Joomla?

Joomla is generally seen as standing between Drupal and WordPress. While WordPress occupies the low end of the Web site development market and Drupal the top end, Joomla would stand between the two. Because of Joomla’s simple, friendly interface, Joomla is widely adopted by many non-tecnical users and former WordPress developers who need a bit more power to build a given site. In the hands of experienced developers such as DTW Devs, Joomla can build a powerful site with thousands of pages, shopping carts, social communities, fancy pie or bar charts and more. However, not every site should or can be built with Joomla such as shopping carts or blogs. Joomla’s strength is not shopping cart specific or blogs but overall multi-purpose data-driven web development. So single purpose websites may use many other tools or scripts which may do the job better.

Ray is a manager at ECA Tech Inc. , Toronto's top Ecommerce software, website development and digital marketing company. He has been a programmer for 28 years. He has some good experience in integrating designs to various software. He has volunteered in numerous IT related free training courses all over North America and contributes articles on numerous blogs. He also participates in continued education classes at local colleges.